We helped the HYZA brand in launching a new product line on the Slovak market - children's sausages and hams, which we named “Dobrotkovo”.

We have implemented another successful collaboration for our long-term partner. For the new Dobrotkovo product line, designed for specific target audience, we have brought forward a creative name, visuals and a comprehensive activation campaign linked to an attractive consumer competition.

Best of the best for the children

With the Dobrotkovo product line, the brand decided to address a specific target group – the child consumer. Therefore, it brings vacuum-packed poultry ham and poultry sausages to store counters, which meet the highest quality standards (high meat content, gluten-free and allergen-free) and are suitable for children.

At the same time, the new Dobrotkovo product line fully correlates with the mission of the HYZA brand, which is to contribute to a healthier and happier life for people across generations.

Once upon a time…

The starting point of the idea was the assumption that the children’s world is full of colors, games and endless imagination. We have therefore created two fairy-tale characters for the children to easily identify with – the boy Radko, who loves to eat, and the girl Dorotka, who likes goodies. Like all children, Radko and Dorotka like to play, they are learning to distinguish between good and evil, and to do good deeds. However, they only play merrily when they are not hungry and have enough energy.

When children get hungry, the game and good deeds are swiftly interrupted by rumbling in the stomach. We used this fact to dramatize the story and create a villainous, but kind character – the dragon Škvrkonoš, who personifies the children’s hunger. However, the dragon (children’s hunger) is always swiftly chased away by children’s hams and sausages by HYZA. We also came up with friendly characters, and that is how the brave “ham-warrior” named Roland and courageous “sausage-bearers” called “Párajkovia” were born. Children, reinforced by goodies from “the Good Address”, now have enough energy, not only to play, but also to do good deeds. This dimension elevates the product to a completely different level and turns it into something exceptional in the minds of the recipients. To a product that not only satisfies hunger, but also brings with it a playful and educational element. 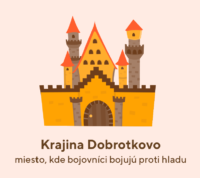 Goodies from a “Good Address”

The name of the Dobrotkovo product line purposefully connects not only good food and the country in which good deeds are done, but also the tagline of the HYZA brand – “Chicken from a good address”.

We also transposed the story of Dobrotkovo to product packaging. We took advantage of the playfulness of the colors, which are based on the design included in the HYZA brand manual, and by adding animated characters, the products once again acquired a child-friendly character. 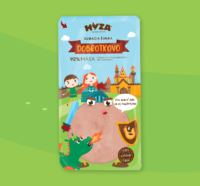 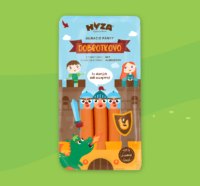 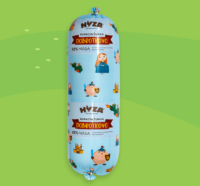 So that the children can play

However, the characters in Dobrotkovo’s story were not only exclusive to the packaging design. They also found their place in playful merch. Radko, Dorotka, ham-warrior Roland, sausage-bearers and dragon Škvrkonoš became appealing plush toys, which can be won in a consumer competition. Puppets, themed memory games, children’s socks and T-shirts with the motif of characters from Dobrotkovo have joined the plush toys and also became part of the merch.

A video ad full of fantasy

We also brought the story to life in the form of a captivating TV spot, which transports the viewer into the world of children’s fantasy and imagination. In collaboration with the production company Vrizzly, we created an ad that tells the story of two siblings playing together.

The whole story gains in attractiveness primarily by connecting the real human world with the world of animated characters, which are the product of children’s imagination. In this way, we have achieved delivery of the message in a language, which the child viewers understand, are attracted to and it grabs their attention.

The TV spot was deployed in both ATL and online environments. Within ATL, viewers can view it on the most-watched television channels of the JOJ group and Markíza, at a time when there is a high prospect of reaching the target audience. In the online environment, we employ both longer and shorter footage, which allows a broader interaction with target groups.

We have also decided to raise awareness of the new product line by implementing an attractive consumer competition, which aptly links the idea of good deeds and places where children play and where they simply feel well. Therefore, we focused the competition on financial support for kindergartens, thanks to which good kindergartens can become even better! In the first phase of the campaign, we called on parents and the general public to register kindergartens to win financial rewards totaling up to €9,500. In addition, we rewarded the first 200 registered kindergartens with the Dobrotkovo start-up package with material prizes.

The competition split into two phases

We communicated the registration phase through detailed e-mail marketing and a suitably selected media mix, which included elements of native content, display formats, video spots, as well as activation of the target group via social networks.

In the second phase of the competition, the public will be invited to vote for a good kindergarten to help them place on the winners’ podium. In order to support the sale of the HYZA brand products, we conditioned voting by the purchase of products whose label contains a unique competition code. We motivated the public to participate in the competition by rewarding the voters, while we will draw up to 101 winners of material prizes, containing the goods of Dobrotkovo, on a weekly basis. At the end of the competition, we will draw the winner of the main prize, a 4-day all-inclusive stay for the whole family at the Grand Hotel Permon**** combined with a visit to the trick-art entertainment and optical illusions gallery, TrickLandia. 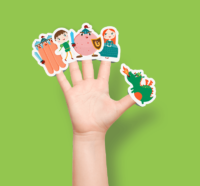 We also supported the competition phase with a set of online and offline banners, citylights, billboards, print and online advertising. The goal was to involve and engage Dobrotkovo’s target audience in the story as much as possible, i.e. families and mothers with children who attend kindergartens. Therefore, the media mix was enriched by the popular portal “Modrý Koník”, where we addressed users with an offer to test the Dobrotkovo products. We also decided to approximate to the child consumer by advertising in the most popular children’s magazines. The selected magazines included interactive elements, which the children could use to build their own Dobrotkovo landscape right at home.

Social networks for children and adults

We also carried the story of Dobrotkovo over to the social networks of the HYZA brand, which we have been managing on a long-term basis. We have divided the posts into thematic genres, which fulfill the fun, inspiring, educational, and naturally hardsell functions. This way allows us to playfully acquaint the audience with the main benefits of the products, which are supplemented with sweet and funny quotes from the ham-warrior and sausage-bearers, while combining them with tasty and visually appealing recipes intended for children’s consumers. We have also established cooperation with influencers @dennik_nevyspatej_matky, @vinarovazena, @radost_je_volba and others, thanks to which we have brought the products, their benefits as well as the consumer competition even closer to the target audience.

The information anchor of the new Dobrotkovo product line, as well as the activating consumer competition, is represented by custom-made subpages on the well-known hyza.sk website. Visitors will get acquainted in detail with the whole story from the Dobrotkovo country, discover complete information about new products, registration of kindergartens for the competition, as well as everything essential about the competition’s entire course. There is also a FAQ section on the registration and competition subpage, with the most frequently asked questions of consumers, which will make it easier for them to find their way around the conditions of the competition as well as its course.

Let's talk
about your brand